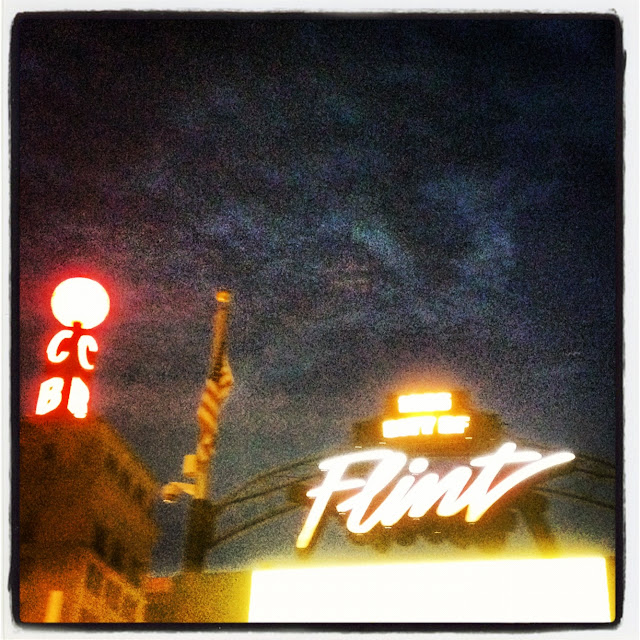 So, Houston is my adopted city, but Flint is my hometown. It's gotten a bad rap for things like...violent crimes, murder, devastated economy...etc.

But, I love it. Seriously.

I was born in a suburb of Flint, MI called Flushing and I basically just moved all around Genesee County until I moved to Texas. I think we took turns living in most of the suburbs of Flint, I went to high school and college in Flint, I worked in Flint. Flint was my life.

A lot of people hated it. And even though I moved, I was never one of those people that stood around muttering, "Flint sucks. It sucks here. There's nothing here".

Those people have no imagination. For one thing, Flint has a fabulous Farmer's Market. I mean, it puts the farmer's markets down here in Texas to shame. It has everything you could want. Cheese, meat, eggs, baked goods, veggies, fruit, more veggies, more fruit. Art. It's fantastic.

The downtown scene in Flint might not be Houston, but new interesting places are opening up constantly. A crepe place, wine bars, Irish pubs, cafes, you name it. Flint has mediterranean/Lebanese restaurants that have no equal down here in the south.
My alma mater, The University of Michigan-Flint puts on great theater productions, writing conferences, shows, and offers a lot of other programs to the public. (And if theater/art is your thing, check out Black Box Studios, Buckham Alley, Bower Theater, Flint Cultural Center and a gaggle of museums.)

Detroit, Dearborn for the Henry Ford Museum and Greenfield Village, shopping in Troy, Ann Arbor for the University of Michigan main branch, Lansing for the State Capitol, all of these places and things to do are an easy hour drive away. You definitely don't have an easy hour drive to ANYWHERE in Texas.

I'm proud to be from Flint. Some people might hate it, or think it's worthless... but I love my roots. My parents both worked at General Motors, a large part of my extended family put food on the table thanks to the Auto Industry and really, I think it's just nice to love where you came from. No matter what small town, po-dunk, crime infested hole you crawled out of.. it helped shape you and that's a beautiful thing.

Flint's on the up and up! See you soon, Buick City.
Home is where my <3 is, xx
Labels: buick city Flint Flint Michigan good stuff flint mi things to do flint mi