An Ode to the Boys in Honolulu Blue 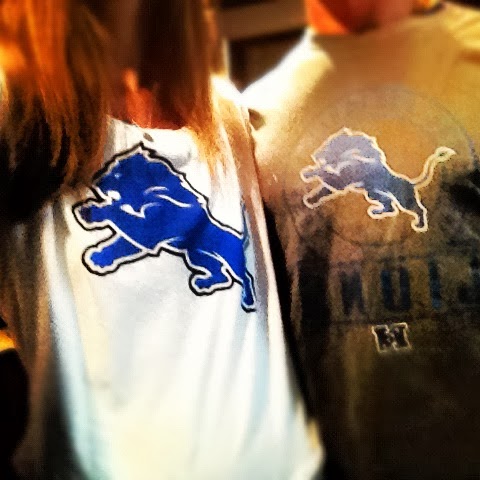 I was born and raised in Flint, MI, the daughter of two automotive industry factory workers. We were typical blue –collar, middle class Michigan. I now live in Houston, TX, where my fellow Houstonian's new found love and pride for the Texans never seems to shrink.  None of my new city optimism has been able to impress me, however. The Detroit Lions are the team I grew up on, and I think, the most important team in football. They’re not just important as a sports club, as a team they represent what is best about Michigan.  Even with their dubious records- I have always been a proud and loyal fan. The amazing thing is, so are most other Michiganders I know.
Living in Texas, it’s easy to see how so many people are Texans fans and Cowboys fans. Even if the Cowboys have been embarrassing lately, one can just look at their glory days to understand the impassioned following they still have. Even looking at the current Texans team and their performance last season, you don't have the long history of wins and losses, so people aren't totally freaking out yet. When a team hasn't been around too long and have had some pretty good seasons in recent memory, it's easy to have pride in them.

The Lions don’t have this. They’ve never been to the Super Bowl. They haven’t even won their division since I was in elementary school. They haven’t won a conference since my father was a year old.  Be that as it may, the fans wear their Lion pride like a badge of honor. The Lions have something other team’s lack. It might sound cheesy, it might be sentimental, but the Detroit Lions have REAL support. It’s hard to love a team with only glimpses of greatness. Yet, still, every Sunday Michiganders and ex-Michiganders watch that game. Hopeful, confident, full of faith in their team... and whole seasons do not diminish it. My dad would upbraid the Lions after one loss on Sunday all the way through to Saturday night the next week, but come Sunday, there we all were, bleeding Honolulu blue, full of faith again, ready to believe that this week would be different. And that’s the charm—that’s how every Lions fan feels. It doesn’t matter that they lost last week, it doesn’t matter how much our hearts broke, we keep coming back, faithful to our team.
It might seem to some reading these words that this blind faith is misplaced, naïve, maybe even stupid. I disagree. This is what sets the Detroit Lions so far above other teams. It is the collective psyche of those who stay tuned, who keep purchasing game tickets, who proudly don their Lions t-shirts, jerseys and hats every week. I think it has something to do with Michigan itself. It’s a pride that no unemployment rate or financial hurricanes can abate.  Some of us may have had to relocate, but that Michigan pride burns deep, this same spirit of resilience and hope includes our love for the Detroit Lions.


Even though things look dark after one game, one disappointed challenge, one dashed hope—who knows what could happen next week? Sure, perhaps it will be another let down, maybe even worse than the last one. But maybe, possibly, it won’t. Maybe something amazing will happen. And that’s why us silly, stupid, dreamer Michiganders, us naïve hopeful Lions fans, never lose that faith. Because the day will come and when it does—we won’t miss it.
We’ve been watching all along.
Labels: motor city kitty pride of detroit