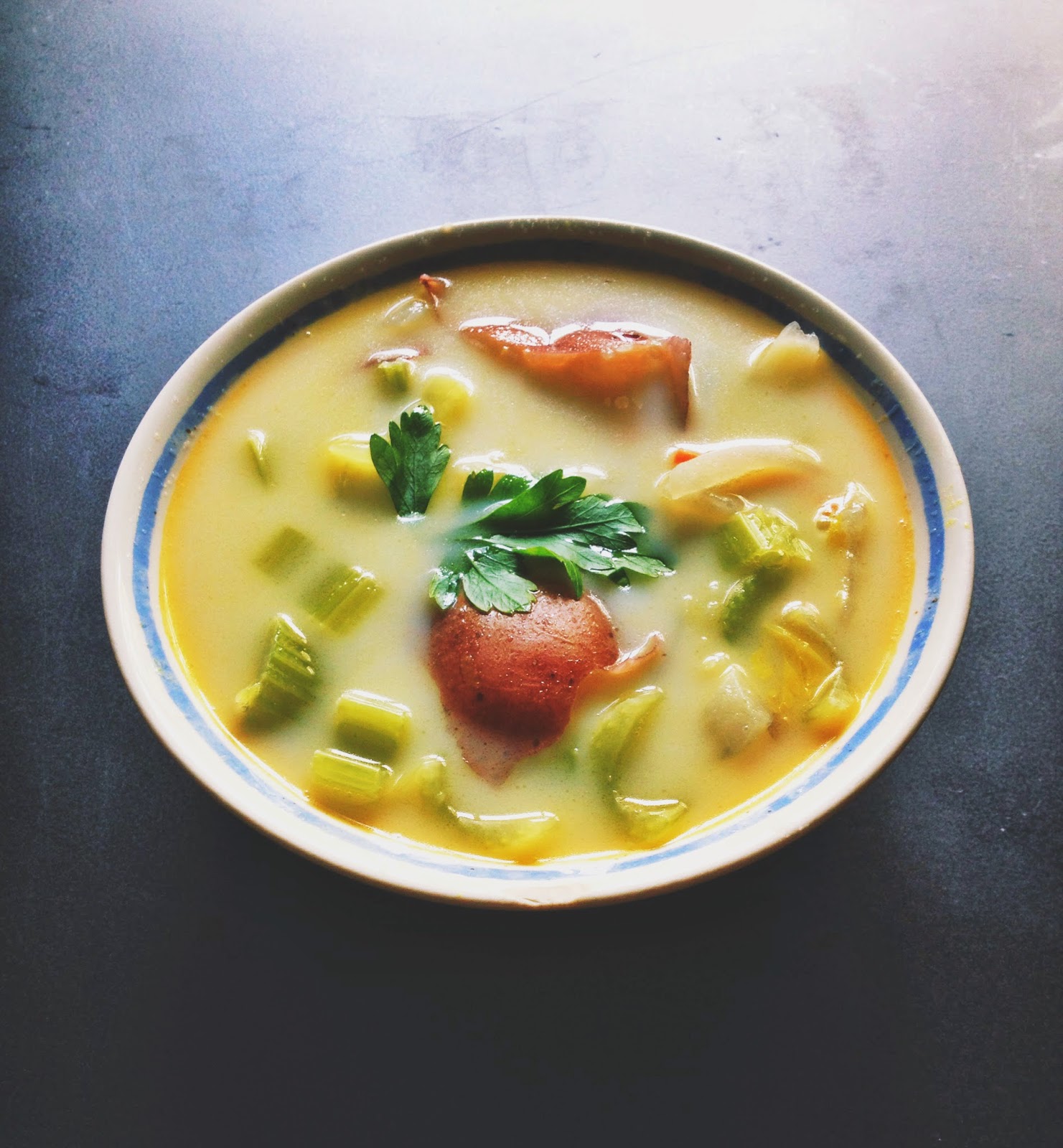 As you can imagine based on my other holiday posts,  St. Patrick's Day is a big deal in my family. Growing up, I would walk into the living & dining room to see shamrocks and green strings of lights covering the windows and hanging from the walls. Everyone had to wear green...and the truth was, everyone wanted to. Just as I wrote in my Valentine's Day post,  my Dad made every holiday a big deal, and so we all looked forward to each turn of the calendar month.

For St. Patrick's Day, it was green everything, starting at breakfast. The eggs would have green food coloring in them, so would the pancakes. Right after we finished up breakfast, he would start in on the corned beef and cabbage, made in the crock pot, and then... the potato soup. My Dad's Potato Soup is a very simple, minimalist recipe... that is strangely addictive. I would look at the soup in the pot and just think "meh, soup", and then after eating my first spoonful, I would somehow tap into my starving Irish roots and have potato souped myself up to the elbows. And then go back for seconds. thirds. Eating all day.

We would gather around the television, (in Michigan, March is still freezing) and we would watch Darby O'Gill and the Little People, Rudy, Angela's Ashes, The Quiet Man... basically all of my Dad's favorite Irish-themed movies.

And now? I still celebrate this way. The potato soup originally had ham in it, which was easily subtracted when we began our pescatarian lifestyle, and we have been known to hit up a bar or two during the day.  Besides that, I have been faithful to the tradition (Terrence just LOVES Darby O'Gill...I think). We still wear green, we still watch the movies, and we eat the heck out of this soup.

Feel free to add ham or seitan with a little liquid smoke or whatever. It's a tasty, easy, and cheap recipe. My Dad usually uses skim milk, but I've read some articles lately, and think whole milk is the way to go. We don't usually do dairy around here, but I'm really not sure what almond milk/coconut milk would do to this recipe (besides ruin it, probably).

Anyway, Faith and begorrah, slaintè and Happy St. Pat's! (and eat this soup!)

Method:
-Boil potatoes until cooked through.
-In a separate pot, boil celery and onions until cooked, but not mushy. (Dad says: "al dente")
-Conserve some of the water from the potatoes, and the celery/onion water
-Using a potato masher/fork just lightly mash the potatoes so they just start breaking apart into pieces.
-Pour the potato/celery-onion water over all vegetables and add the milk and butter
-Heat just to simmer. (DO NOT BOIL MILK)
-If using ham/seitan, add while soup is simmering
-Serve with parsley for garnish and flavor.

And videos of Gerard Butler and Sean Connery singing Irish songs, for your enjoyment: