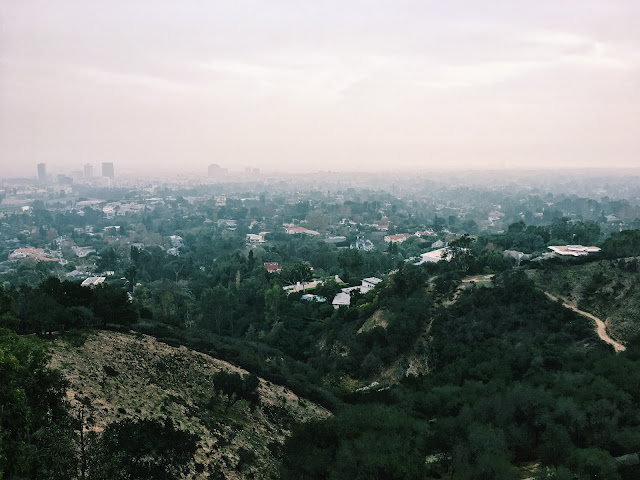 When it comes to museums, I am spoiled. Some of my favorite haunts are not necessarily big gunners like the Louvre or the Met, but I’ll visit the Mauritshuis in the Hague, the Pinacoteca di Brera in Milan, or the Art Institute of Chicago over and over again. On a recent trip to Los Angeles, then, the idea of spending some leisure hours at the Getty Center Museum was more than welcome.

The Getty is actually one of the most visited museums in the United States, and if you check the reviews online, they are almost five star. The idea of the museum with art and antiquities collected by a somewhat eccentric, American industrialist known at one time as, “the richest living American” was too good to pass up. It seemed impossible not to be impressed.

The Uber dropped us off at a designated point, and from there, a flight of stairs to the tram. The  tram very slowly ascends the hills surrounding the Getty, leaving the world of Los Angeles behind. As slow as the tram was, we were afforded a few very exciting sightings of deer in the brushy woodland slopes. The tram car came to a stop, and we were at the Getty.

Is it unfair to admit I judged it immediately? It was a white, modernistic monstrosity, looking like a large dentist’s office, or a telecommunications building. After the renaissance and neoclassical structures of museums in Europe, or the Beaux-Arts beauty of the Detroit Institute of Arts, this was…horrendous.

Placating my own disappointment with reminders that the works inside were what mattered, we ventured in. The photography wing was lackluster, mostly because wander as we might, we couldn't locate more than ten photographs, though we were told there were more…somewhere. The gardens were largely unimpressive, and I felt myself thinking they would have been better off leaving the brushy scrub, scraggly trees and errant deer. Inside, we paused to ask directions to the paintings, as I’d already seen a brochure and knew there were some gems awaiting. The museum boasts Rembrandt, Manet, Renoir, Turner, Titian, Gauguin, Van Gogh, and so as disappointed as I’d been thus far, I knew that the old masters and impressionists wouldn't fail to impress.

And they didn’t, of course. Art communicates a message across the centuries that speaks just as loudly now as it did when the paint was drying. That said, there was an emptiness to the space, still. Perhaps because the art largely came from a private billionaire’s collection, or because of the strangeness of  the history of J. Paul Getty himself, the rooms containing the artwork felt oddly flat, less stirring than the golden galleries of the Scottish National Galley or the hallowed halls of the Rijksmuseum or even the cramped Rubenshuis. Several times I purposely exited a room to step outside and peer over the side of the Getty Center, my eyes fighting the haze of LA, seeking out sights and life of the city in the distance, the beauty of every day life somehow more interesting than the walls within the museum.

After an hour and a half, we found ourselves ambling back toward the tram and the lights of Los Angeles below us, a few deer still poking around in the bushes, sometimes staring unwaveringly into the windows of the passing tram.

Arriving back into Santa Monica elicited a sigh of relief. The sun setting over the water provided  its own masterpiece, and a reality check— it isn't  necessary to visit the museums of the world to be spoiled by art.