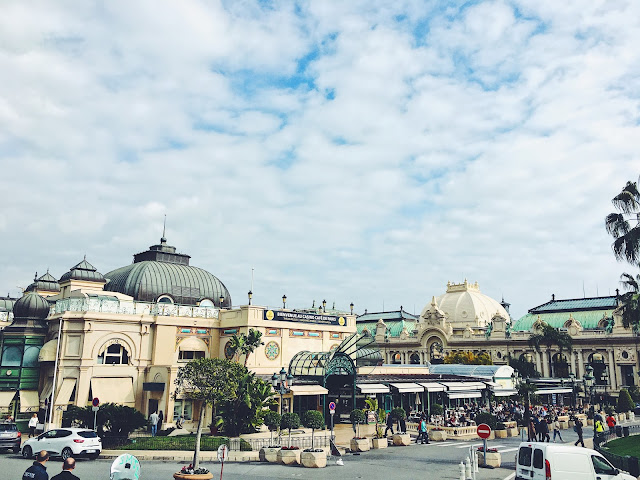 Monaco. The word alone conjures up images of James Bond movies, glamour, and Grace Kelly, golden-days-of-Hollywood. Those images are not far off.  In fact, on my recent trip to this tiny country in France that all of those images were truer than I could have imagined.

We went for the day. I didn't know what to expect and I didn't really know much about it except that the whole place was slightly larger than a postage stamp, and was close to where we were staying on the Riviera.
So it was that one late morning, we jumped into our little car, and drove to Monaco. The French Riviera is impressive. It's all yachts and bright colors and beautiful water— but, Monaco is something completely separate. If I thought the ambiance and glitz were impressive in Nice, then I had another think coming. Monaco was something out of the Lifestyles and Rich and Famous, and I couldn’t help thinking that at any moment Robin Leach would start narrating our trip. We found a parking garage that seemed to go into the very bowels of the earth itself, parked, and began our stroll around Monaco.

First, we wandered over to the grand casino of Monaco, the Monte Carlo. Gorgeous both inside and out, containing the kind of splendor that can't be matched by anything as gaudy as Vegas. It possesses a glamour that is old world and, and yet somehow unbelievably luxurious and modern at the same time. There were hordes of people around, all taking pictures, waltzing in and out of the casino willy-nilly, drinking  22 euro cocktails, but not gaming— almost no one seemed to have enough money to gamble,  not in the Monte Carlo, anyway. We walked around the hairpin turns of the famous Monte Carlo track, strolling past images upon likenesses upon statues of Grace Kelly, but all of it seemed slightly strange. A little bit like Disney World, and a  little like a dystopian future wherein there is no trash, or homeless, or really anyone that isn't fabulously wealthy. I began to wonder if anyone really lived in this place. It seems strange to call it a country when it was smaller than the city that I grew up in. It was certainly beautiful, but there was something eerie in that beauty— a strange stillness that was devoid of grime, but in a way that made it feel artificial, unnatural, creepy.
What kind of a place doesn't have any visible grocery stores or regular pharmacies? A country that instead sells Bugattis, Lamborghinis, and oodles of Rolls Royce all in a row? Because it was early, before the season really had begun, everything appeared to be closed. All of the museums, the palace, the only thing available was the casino itself to walk about in, or gamble if you had an extra thousand euros. We walked around Monaco for some time, and though it was lovely, expectedly so, overwhelmingly so, the colorful buildings and perfectly manicured landscaping, and cute little flower boxes all looking out onto the sea. But there was something missing from it. I missed the dirt. I missed the trash, the evidence of human habitation and grit of life.

That was what was missing most of all— life. Monaco is incomparably lovely, the view is unmatched, the country unfailingly tidy and bright. It was a beautiful place to spend the day in, but Monaco seemed about as real as those silver screen movie stars and fanciful Bond movies.  A place that was not quite touchable, relatable, or real.

the above article originally appeared in My City Magazine
Labels: monaco monaco for couples monaco travel monaco trip guide things to do monaco