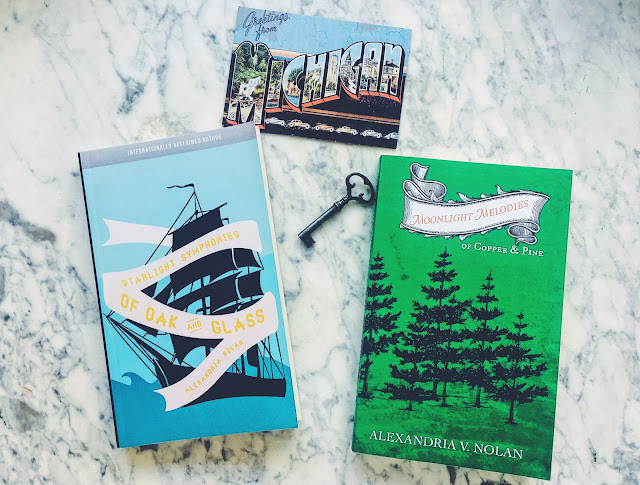 No matter where our summer travels take us, the season itself always brings my mind back home to Michigan. It really is the most wondrous place in the sunshine, with a lake never more than ten miles away from any given spot, pinewood, balsam, cherry trees in bloom, dripping with cherries like rubies.

I've begun work on the third book in the Starlight Symphonies series now, and it is well underway. When I began the series, I didn't want it to be a standard series or sequels that clung together like scared children, unable to stand on their own as books. Because, after all, it is the story of Mackinac Island that I most wanted to tell, and the type of people that are captured by life on a northern Island. Soldiers at the fort, passing through, merchants, fur traders, Native Americans and trappers. Anyway, the Third installment, set during the aftermath of the Civil War, when the island is just as adrift as the returning soldiers, is going swimmingly, and I am having a ball writing it. Though I miss Michigan so very much that it is painful to write about how beautiful it is in the sunshine.

Below, I have attached an excerpt from a review of Moonlight Melodies written in an academic journal. (Big league, baby.)

"On the surface, Moonlight Melodies is a compelling fantasy novel complete with visions, magic and ghosts. However, those fantastic elements co-exist with Nolan's recreation of the realities of the multi-cultural insular community, cut-throat business environment, and native tensions that characterized life in the Great Lakes region in the early 19th century."  Jacqueline A. Justice, Ph.D., Inland Seas