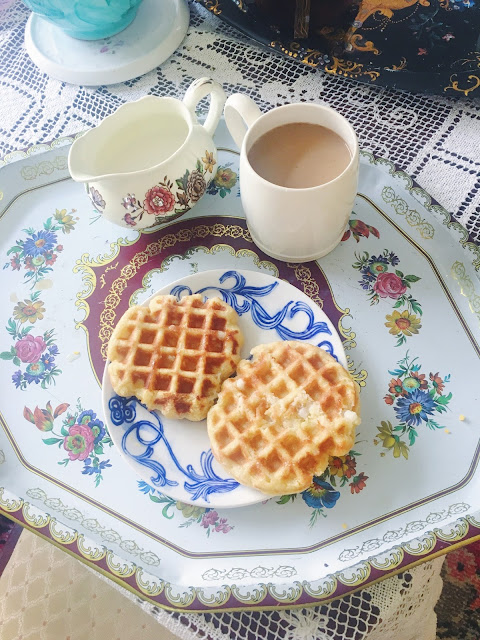 We are missing Antwerp lately. And Belgium in general. We fell in love when we went a few years ago, and though we've returned to Europe many times since, we haven't made our way back to Belgium, despite tentative plans a fair few times.

The thing we miss the most are the waffles, of course. Golden, yeasty, sugary, buttery griddled bites of delight. We have spent many romantic evenings reminscing about our favorite foods from our travels, and these waffles top the list. Which is strange, because on the whole, we are both more of deep, dark chocolate mousse people. But there was something about the waffles, their simplicty, the hand-held aspect, the portability of them that made them the perfect city-exploring breakfast or snack. Or, really, we ate them as often as we passed a street cart selling them, if we're being honest.

They are fairly popular all over Europe, but they're never quite right anywhere else. They're slightly flimsy, or don't have the right texture...or the flavor is just off.  And with other trips planned to other cities already in the books, we knew Belgium was still on the shelf. So, we got creative and broke down and made them ourselves.

I found a suitable recipe online that looked promising, making sure to special order the correct Belgian Sugar from Amazon, and also a waffle maker. And after an hour and a half of actual hot and hard work, what I produced can only be described as manna from heaven.

So, if you've hadn't had occasion to visit Belgium lately or at all, check this recipe for Liège Waffles, (which are quite different from Belgian Waffles, mind you) and pretend you're exploring the Antwerp or Brussels streets.