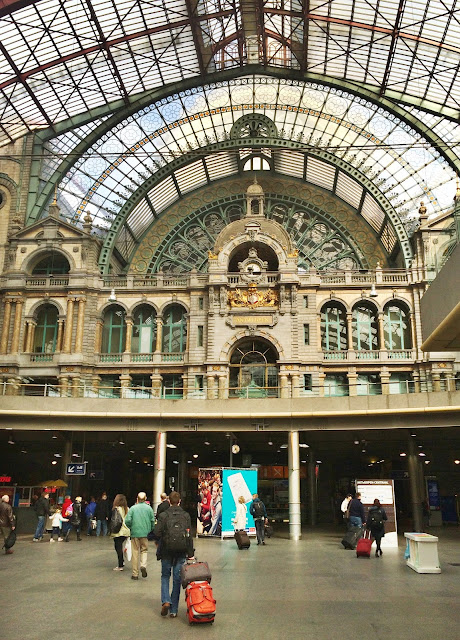 When I was in college my mother took me from Flint to Chicago on the Amtrak train. I remember little to nothing about it, except the fact that we took the train instead of driving, and it stays in my memory as unremarkable, if nothing else.

I was excited for it, though. That I do remember. A journey on a train always seemed like something a little more romantic and elegant, and even if the reality of Amtrak dispels that notion stateside, train journeys in Europe are something else altogether. Something much closer to that romantic expectation.

Trains in Europe are very common. You can take a mostly ordinary train from Paris to Versailles, a quick 45 minute or so jaunt to the countryside. There is a spectacular high-speed train from Madrid to Barcelona where for 20 euros more than the base ticket you can ride first class and have chef-created meals catered to your comfortable seat as the lovely Spanish countryside rushes by. There’s a ponderous trip from Rome to Salerno, cramped and uncomfortable in cars that smell like salami and garlic and very loud talking for the entirety of the too-long trip.

We have taken trains in France, Spain, Belgium, the Netherlands, England, Italy and Denmark. Old trains, new trains, first class, second class, standard class, practically cattle car. And the aspect of train travel that still stuns me the most is how incredibly common it is. No one seems at all nervous, or excited, really. In Amsterdam or England, taking a train to work is de rigeur. Not a tram, or a metro, mind you, but a train. To me this was always something out of a 19th-century novel or exciting adventure tales of the American West, a bygone experience now lost to time.

But across the Atlantic, time has stayed still, at least when it comes to trains. I think I am not the only American who is entranced by this. There is something about waiting for a train to arrive, about standing on a platform, searching for your car and settling into the seat that a plane can’t compete with. It’s…civilizing, somehow. To travel on a track as the world outside passes by, and you can watch it do so—there’s real beauty in that. Train travel offers a connection to the outside world in a way that we do not get the privilege of experiencing it anymore. A plane is too high, one feels that one is almost removed from the Earth entirely. When driving one is focused on the road ahead, the traffic and the directions. The passenger is assisting with music or talking, or looking blearily through the social media on their phone. Which leaves only, really, children in the backseat to enjoy the scenery as it passes. In that way, a train journey lends us back that piece of childhood. The opportunity to look and watch the world in a way we are too busy for as adults.

No matter the luxury, or lack thereof on a trip on the rails, I find that a train never loses its excitement for me. It’s a call back to bygone times, and mystery and history. It’s coal and industry and black smoke and the chug of a choo-choo. It’s childhood and adult adventures through new places, the tracks connecting cities and countries and one experience from the next.