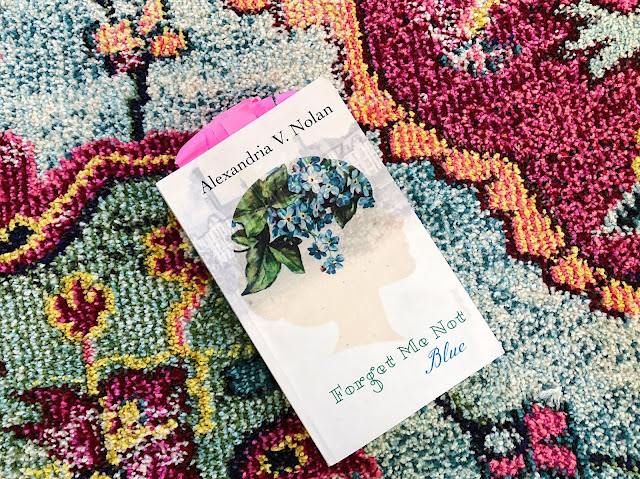 The Kindle and paperback will go live January 3rd, 2018. That means that by pre-ordering the Kindle version not only will you receive an early ordering discount (YAY!) but it will automatically, MAGICALLY appear on your device on January 3rd. The paperback will be available as well for purchase on the 3rd, and if you purchase the paperback (which is LOVELY + has extra pictures bonus materials) you are eligible to receive the Kindle version for free on Amazon! (How about them apples?)

Preorder HERE: Forget Me Not Blue

Let me leave you with a small excerpt to give you an idea of the spooky, mysterious story waiting within the pages:

"Simon sniffed at the air and made a face. He wrinkled his nose as though something putrid lingered. His eyes never looked at hers, and she wondered if it was because he could not look her in the eye after what he had done to her. But instead those reptilian eyes ran over her figure like so many grasping hands. Nurse Bell, whom Celia did not really know, sat in the far corner of the otherwise empty common room writing in a little book and seemed to pay them no mind at all.
She spent the intervening silence studying Simon. He was unbelievably handsome. The devil comes in many guises, her mother had always said. Even that of a Renaissance angel, apparently. His hair was golden and hung in spun curls, and his eyes flashed turquoise green. Full lips with sandy clipped mustachios and a strong jaw all sat on his tightly muscled form that seemed made for dancing or riding a horse. Though Celia knew that it wasn’t restless energy that his body yearned for, but violence. His clothing was perfectly tailored, purchased with his wife’s money, no doubt, as she knew he had none of his own.
But, for all that beauty there was something empty about Simon. Something so lacking that for all that she could see his obvious charms and attractions—she was repulsed by him. Not that she had always been, of course. It had taken time for her eyes to adjust to the kind of wicked, hollowness that he was comprised of. But now she felt that she might be actually physically ill, and she swallowed bile many times in those first silent minutes...."
Excerpted from Forget Me Not Blue by Alexandria Nolan