Forget Me Not Blue 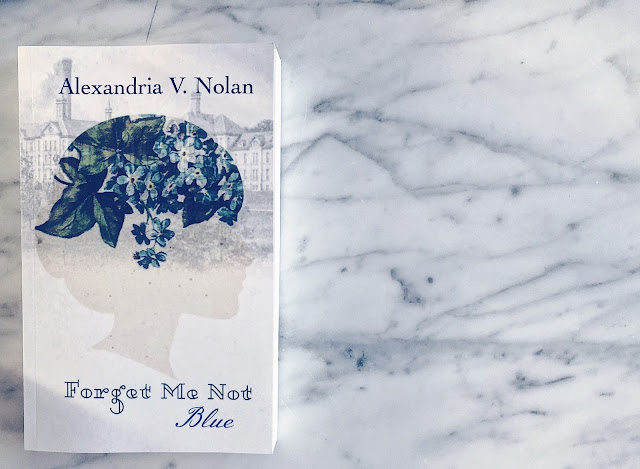 Hurray! The book is out! Book release day is always bittersweet for me. Like dropping a child off for their first day of school. I wave tearfully as my little creation is let loose on the world. It's also sad because it means that I have to get my butt in gear and work even harder on my next project, in this case, the conclusion to the Starlight Symphonies Series.

But Forget Me Not Blue is out and I'm over the moon. For me, this was in some ways a  deeply personal book, and also the culmination of a lot of different ideas and thoughts and research about the Northern Michigan Asylum in Traverse City. It's a beautiful place, both the asylum and the city, and never is far from my overactive imagination.

Here is a further excerpt as a convincer, and if you haven't already, do yourself a favor and buy the book. No easier resolution than to read more and support independent artists, amirite?


He is so very changed. At least, I think that is true. He was charm and warmth with the glow of the sun itself upon our first acquaintance, so many years ago. But over our time together he has grown hard and cold. He is seeing someone else too. Probably more than one someone. I’d found the gold-brown hairs on his jacket. He’d slapped my face when I held one out to him from the bed. I hadn’t said anything, let the hairs speak for themselves. I didn’t even mind, I suppose. Not anymore. Had I ever? Perhaps once I had loved him, yes. But instead now with my face still stinging from his hand—I was sure there was a cut from his ring—he sneered at me. “It’s your hair, you mad woman”. He said the words carelessly though as if he were remarking on the weather.

It might be the same color, but I know that the hair is not mine. It can’t be. My hair hasn't been that lustrous with health in ages. It falls brittle down my back and breaks when the maid tries to braid it. Doesn’t it? I think I am right. He calls me mad, and mayhap I am, but I think I am right in this.  But Simon’s cruelty is his power. He wields it like an axe. He could convince anyone of anything. I wish I could ask Mama, but the accident happened years ago now. My first thought this morning was to write to her, but then I recalled, abstractly, that she was dead. Perhaps it wasn’t her I wanted to write to at all, but the idea of a mother. Someone to confide in and confess my troubles to. But that is all my life is now. Troubles. The babies die in my womb as if my body itself is a barren field where the growing fruit can take no nutrient from the soil of my blood and bone. Simon would say that these were maudlin thoughts. That I was killing the babies myself with my melancholy. He would find a doctor to tell me the same, and I might even believe it. Simon is right, I am going mad. More every day.

My last letter from Mr. Montague was confusing. I had hoped to change the terms of my will, hoped to make it airtight, so that Simon could have no more of my money. I wished to create a will that made my death an undesirable event to Simon. But Mr. Montague wrote as if he had seen me already, and lately. At first, I didn’t believe it! I hadn’t seen him since I was a child, since before Mama and Papa died. I don’t think I’ve seen much of anyone except the servants and that odd cousin of Simon’s mother that comes here sometimes. Always frowning at me, as though she’d spilled milk in the kitchen and didn’t want anyone to know. But other than that, I do not leave the grounds of this house. The woods are large and deep, and the house itself has to be the largest in Detroit. What need do I have for going out, when I can make others come to me? And then I realized perhaps that is what I had done. I had ordered Montague here and changed the will. I was less anxious after this, but it still rankled. I could not remember, you see. Could not remember his face, or any details of the discussion.
Simon speaks of a spa treatment. Some man named Kellogg who has an institute in Battle Creek.  I gather he has strange ideas about grains and diet that I don’t much care for. It sounds like the place to send invalid soldiers, not heartbroken women with cruel husbands. I told him flatly, no. He seethed and struck me, but I was not troubled much. He cannot ever get into my soul. It is already filled to the brim with my lost children, and if he can be believed, my own madness has consumed the rest.

I do not think it will be long now. I wailed and cried and cursed the world for some days. I spit in his horrible mother’s face and scratched at the doctor. If one is going to be deemed insane, it is better to play it up the more, I have found.
No, it will not be long now. The little maid has told me that I have not stopped bleeding, and that my pulse is as light as a butterfly’s wing. I like the little maid. I forget her name, but she is kind. Simon says there is no maid, just the doctor, but surely he is wrong. Or, perhaps not. Mayhap I invented her.
That odd relative of his came in with his mother some time ago. She looked at me and then the door, and bit her lip as though she would cry. I haven’t any idea what she has to be aggrieved about, she knows me not at all, and Meredith Green, Simon’s mother, is the devil’s hand. She spoke to me about my will, tried to hand me a slip of paper to sign, but I turned away. I cannot bear to look at her face, she appears more repulsive every time I look upon her.

Simon has gone out. I think perhaps he has brought one of his someones with him. Behind my eyelids, I glimpse a sea of faces, heart-shaped, or oval, with cupid’s bow lips and pretty blushes for his charms. Those cheeks and lips were mine once. But, now…it won’t be long now. I can feel it coming.  ---excerpted from Forget Me Not Blue by Alexandria Nolan, 2018.

Order your copy in paperback or Kindle here: Forget Me Not Blue

Next week, tales of Paris on the blog. xx