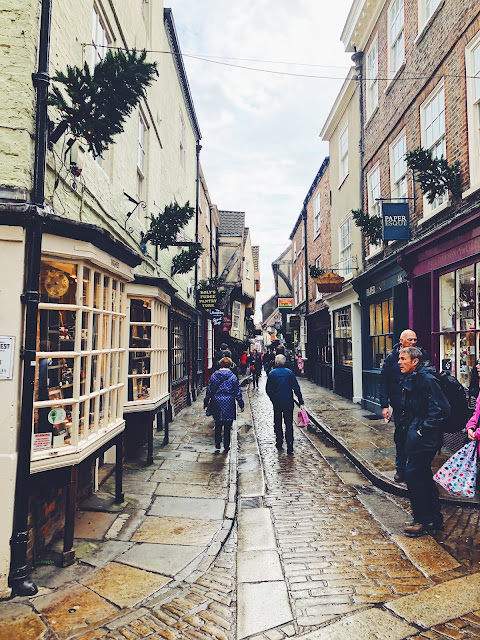 In the autumn, my thoughts always tend toward England. Perhaps it is because I have read too many novels, or because the weather in the rural UK seems to be perpetually made of falling leaves, mud and rain. In any case, when the world around me turns orangey and the temperature starts to dip (even a little) I find myself in Britain, if only in spirit.

For the last couple of years, however, come autumn, I was in the United Kingdom in the flesh, and last autumn I had the pleasure of visiting York.

Now, I must admit that my knowledge of this city in Northern England prior to this trip was relegated to what I had seen in films or read in books, a vague idea of Vikings and an affinity for York Peppermint Patties, though I didn’t know how they might be related.

We planned a trip through the Lake District, up through the Yorkshire Dales, and then finally we would end our trip in York, in what we figured was the sort of “London of Northern England”. Rolling into the city on the wrong side of the road and the wrong side of the car, the change from the dales and rolling farmland of rural England was staggering. And still, somehow York was not cosmopolitan. Not like London, at least. There is an oldness to the city, a stubbornness almost. A resistance to letting go of its past that is charming and unusual.

It’s embedded everywhere. Like a lot of Europe, the churches and houses, shops and pubs are all old. Or at the very least what us North Americans would consider so. A bakery that’s been run in the same shop on the same street by the same family for 200 years (baking some type of meat pie that was mostly made of lard and memories from what I could tell). The buildings are stooped and the streets are narrow. One is pulled backward, almost violently, into centuries past. It is simple to imagine what life would have been like then; people pressed together because of the closeness of the street, the smells of the restaurants and pubs pouring out, the rustle of purchases in bags, and the sounds of the 40 nearest conversations thrumming through you.

York feels older than London, and it feels somehow friendlier too. We toured the museums which were wonderful and varied: The Viking Museum, Yorkshire Museum, Art Gallery, National Railway Museum, the Merchant Adventurer’s Hall, to name a few. There were oodles of antique shops and outdoor markets and in the autumn—the St. Nicholas Day Fair. Steaming cups of boozy hot cocoa and cider, baked treats and every kind of homemade knickknack and knitted object you can imagine. There was a warmth in the city, even though the temperatures dropped as the evening came on—and night hustles in quickly this late in the year.

We hadn’t known what to expect with York. I hadn’t bargained on how serious (and early) the city would take the Christmas holiday. I was pleasantly surprised in the way that York blended a cutting-edge Japanese restaurant into an 18th century brick building probably teeming with ghosts. Or the way that the bells of York Minster could still ring as powerfully now as they did in the 1400s—or that you could still find locals stopping to listen to their music.

York was familiar. Maybe because it was, in so many ways, that same city from my novels. Or perhaps it was  because the weather was crisp and the leaves were falling and I’d finally answered England’s call.