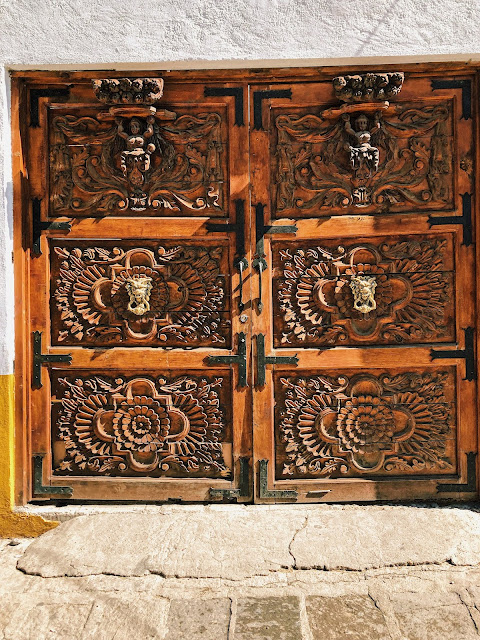 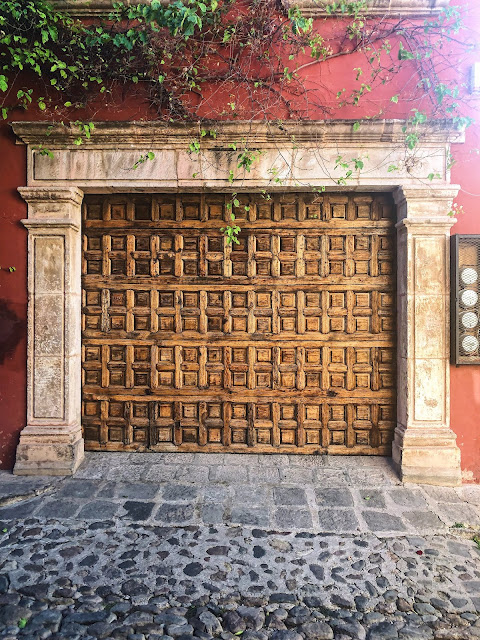 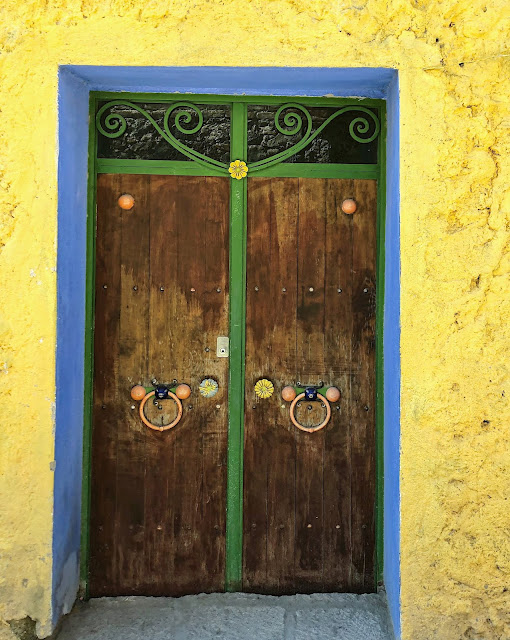 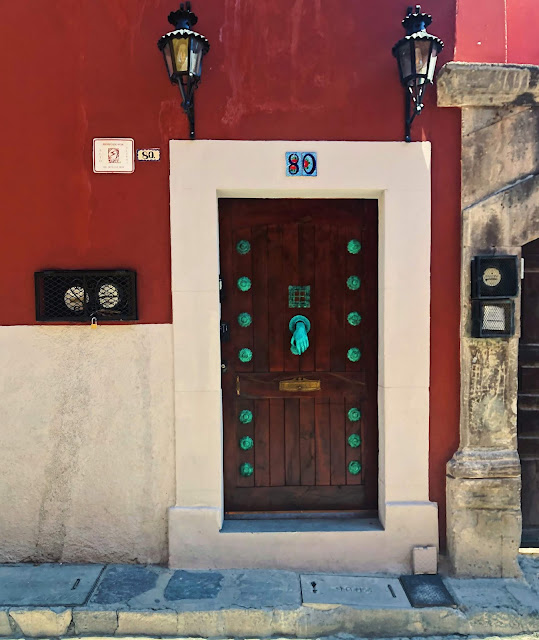 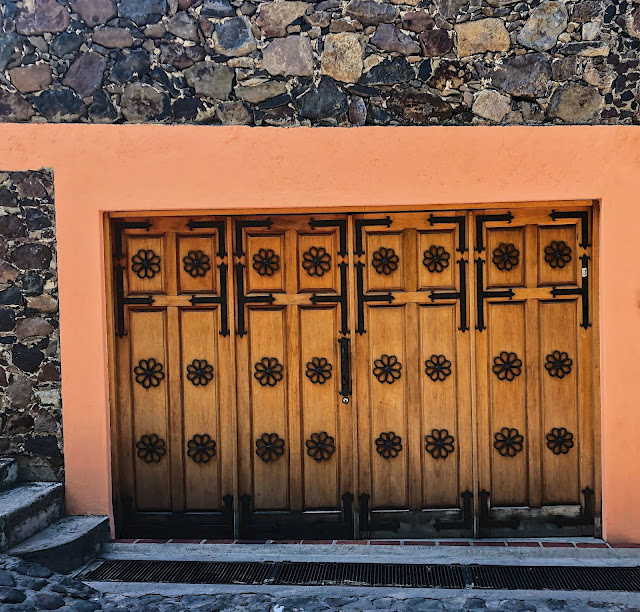 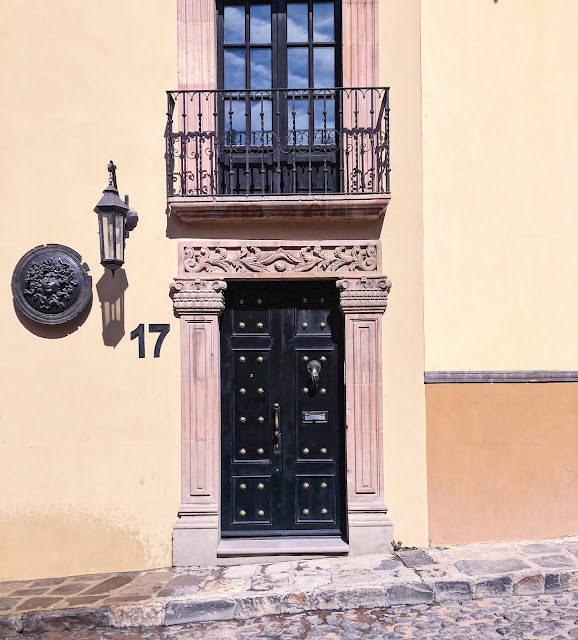 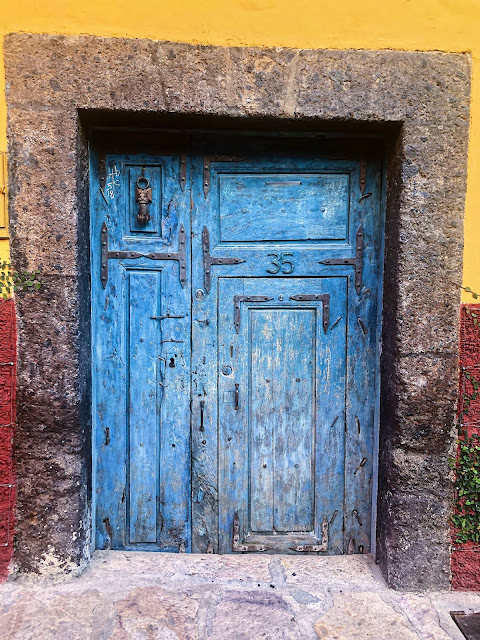 When we booked our trip to San Miguel de Allende, I thought I would be most excited about a little R&R, margaritas, European style architecture, and tacos, tacos, tacos.

Instead, I was transported...by the doors.

Yes, doors. Maybe because there was very little R&R to be had with a 5-month-old infant, and as a breastfeeding Mum I had to take it easy on the margaritas. So as we walked the streets, the charming, narrow, medieval village style streets, it was the doors that captured me.

Fascinating doors. Some well cared for, polished and oiled, wood shining brightly in the sunshine. Doors set into bright orange and soft pink walls. Others were shabby and somewhat forgotten, wood chipping in places, paint rubbed off and peeling. But rich or poor, gleaming or grungy, the doors were all eye-catching.

Generally, doors in foreign cities cause a bit of curiosity. Who lives there? What happens behind that closed door? What are the lives like of those that spend their days behind it? It's fun to imagine what your life would be like if it was your town, your house, your door, and the key for it and the life within was inside your pocket. But these doors were something else entirely.

It wasn't only the lives within that were interesting, but the doors themselves. Almost as if each one was a portal to a different world altogether. Maybe because San Miguel as a city feels a little magic. Every once in a while in our world travels we stumble across places that seem to exist in a different time--or perhaps out of time completely. This was San Miguel. Art galleries, the church in the city's center that felt more Disney-fairytale than real life. Green parks, brightly colored buildings, cobblestone streets, colorful markets and as one local said to us, " the whole city is a restaurant!". And even amongst all of this, the doors commanded attention. Painted, oiled, adorned with metal embellishments or gorgeous knockers shaped like hands, frogs, geometric designs or flowers. Long forgotten or newly cleaned each one was a treat to behold.

It seemed that every street contained a multitude of these doors. And behind some of them—palatial mansions and haciendas. Tiny restaurants behind a bright red door or an intricately carved door with a cafe behind it selling Mexican hot chocolate, (with just a hint of chili pepper and cinnamon), or a glass and wooden door painted bright spring blue that opened into a bakery stuffed to the brim with cinnamon rolls, scones, brownies and lemon tarts. Others with shiny brass knobs and finials were the entry for museums and galleries, showcasing local arts of all sorts. But for me, once again, it was the door on the front of said gallery that was most worth looking at.

As I said, there was very little rest and relaxation. There were most definitely not enough margaritas, and it is a simple fact that there are never enough tacos. Instead, there was a lot of breastfeeding in questionable restrooms and ever-awkward balancing-act diaper changes. There were countless fussy moments (for baby AND me) and many hours of a smooshed face pressed to my chest snoozing in his carrier as we explored the streets (and tried not to break our neck or our ankles on the cobblestones). But there was always the magic of the city and the beauty of the doors. I wish I could have peeked behind every one of them--just to be sure there wasn't another world back there.
Labels: mexico in november san miguel de allende san miguel travel