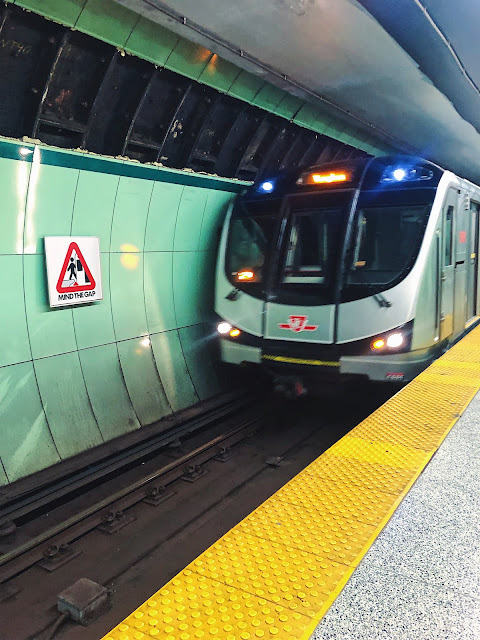 Not too long ago we visited Toronto, and the trip forced me to reflect on the lack of widespread, usable public transit in the United States…and how much easier it would be to cart around my kid if we had it.

Unless you are living in one of the few cities with easy to use, comprehensive and convenient public transit, then you probably have a car for daily use, and you are forced to rent a car or use taxis and ride share services like Uber when away from home.

This was something I hadn’t thought a whole lot about until we had started traveling in Europe— where point A to point B is a quick ride on the metro or a jaunt on the tram. But the inconvenience didn’t really hit home until I had this baby, because, folks, babies can’t ride in Ubers without a car seat.

Don’t get me wrong, Toronto has a great subway system, but it’s not quite at Paris/Amsterdam/London situation as far as  the number of lines and stops. This became abundantly clear as we marched half of a kilometer here and a kilometer there. The weather, which had been temperate and pleasant, suddenly became frigid, rainy and blustery with wind. A baby bundled into my chest, the wind blowing back our umbrella as we took a train to a tram, disembarked and walked a clip so that we could switch to a bus and still had six blocks to walk.

In any other place we would have hailed an Uber or a Lyft from our phone, but, as we had no car seat packed away in our pockets, this was not an option. So we trudged on ahead, marching through the rain and feeling very sorry for ourselves and not really that fond of adventures anymore.

Now, taxis do in fact welcome babies, sans car seat, as they are considered public transit—just as a car seat is not required for a bus or streetcar. But if you’ve ever been in a taxi, you’ll know the fare is...extensive. Expensive. The price of a whole week’s worth of Metro tickets. So, for every day use, a taxi is not ideal for a vacation budget.

But, at any rate, Toronto was cold and gloomy, rainy and gross. Our umbrella was useless against the wind and we were soaked to the bone. The day before had been lovely, sunny and warm, and we took in the old houses in the Annex area of town and all over downtown and the Entertainment District and nearby. It seemed to be a mix of New York, Chicago and multiple European cities in a sort of antique, well-constructed but rundown sort of way.

We were taken in, though. There is an impressive quality to Toronto that our current Canadian home, Calgary, lacks. We had spent that sunshine day enchanted, making plans for all of the sights we would travel to on the morrow, all the shops we wanted to stop by, what restaurants we wanted to check out.

But, when tomorrow came, it brought the ghastly weather, and between that and the convoluted transportation, all of those plans were set aside after a good soaking, for the comfort of our hotel restaurant, and an early bedtime. We ended the trip with a longing for trams that run from one end of the city to the next, for underground trains that have stops every two to three blocks in the center of the city, and wishing that more of the United States had any kind of usable public transit that we could bring our child on.

Toronto, thanks for the cheap rides around town. America—get your act together!