Beach Reads--Forget Me Not Blue 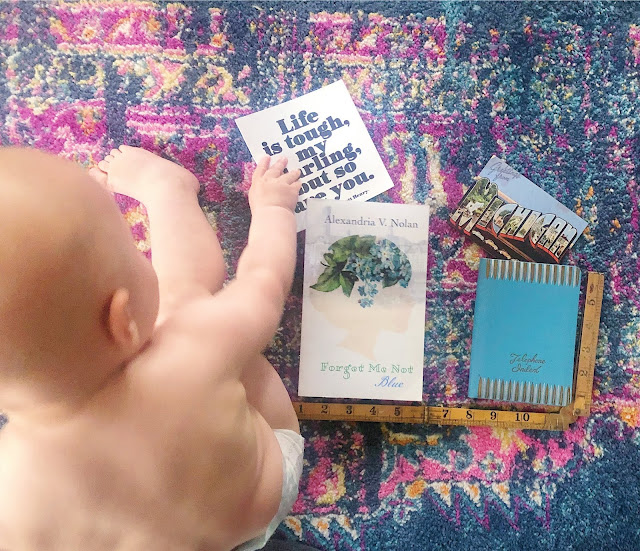 It's almost summer. And so, if you're anything like me, you need a book. Actually, you need a stack of books. A veritable personal library of books to keep you entertained while sunning or whilst taking a break from the waves of some beach, somewhere. May I recommend, Forget Me Not Blue?

If you, yourself have already read it. Bravo! I thank you from the depths of my soul! Read another of  my books, pretty please. Or simply pass this blog post on to someone who might be interested.

For today, dear reader, I have for you an excerpt from the book, which details Celia's introduction to many of her co-inhabitants of the asylum in which she is being kept. (but does she belong there?!?)

“I’m almost certain you’re not quite mad. Perhaps only a little, which is fine by me. People who have a little less sanity are more interesting anyway, don’t you find? Like Nelly Gromer, over there by the window? The one holding an umbrella? She’s only a little mad as well. The girl was in a rainstorm, poor dear, and then she fell ill. She’s been a little bats ever since. Laughs hysterically at anything even mildly funny, which makes me feel very droll indeed. But she cries absolute rivers when you tell her you owned a cat as a child and then reveal it has since died. Makes one feel as if one’s small tribulations are vastly important.”
Annie shook her head as if satisfied at Nelly’s level of emotions being higher than they ought.

Celia was stunned. How did this woman know her? She sat back in her rattan chair, emitting further groans and creaks from the protesting twisted palm. She took in Annie from this vantage. Dull, wheaten hair, with a pale complexion more faded whitewash than alabaster. She had hollow cheeks and a decidedly crumpled way of holding herself that made her look like a used paper bag. Celia herself was small but cherubic with round apple cheeks, and though not fat, she was decidedly not angular. Annie was. She looked like Nelly Gromer’s umbrella turned inside out by a storm. Consumption—that’s what she looked like. But her eyes were bright and strange, and she laughed easily, which she did now again to see Celia’s expression.
“I help out in the records office. I’m technically not supposed to look at other patient’s files, but when you came in I was curious. You looked somewhat familiar. So I took a peek before I sent the file along to Dr. Norbert’s office.”

“But, it turned out I was mistaken. There’d been an article some time back in one of the papers, I don’t remember which— about some society lady meeting with a grisly death or illness? Or she’d run away? I don’t remember. Or maybe I am making it up.” She shrugged, uncaring.
Celia relaxed, for a moment she had thought maybe that this woman knew Simon, but Annie clearly did not. She had already changed the subject and suddenly grabbed Celia’s hand and had visibly brightened. “Well, I suppose I ought to introduce you around!”
Her voice had gone merry, and she pulled Celia to standing with more strength than Celia could have imagined an ailing woman to possess. She gestured toward the group of ladies in the corner who smiled kindly, if not bizarrely, in Celia’s direction.
“This is Myrtle and Sarah” she said, indicating two silver-haired ladies whose mouths never seemed to fully close. One, Celia supposed it was Sarah, had eyes that had gone milky white and brown spots like dripped paint up and down her gnarled hands. Both the women nodded in Celia’s general direction and their grins grew somehow wider than before, which produced an effect of friendly terror in Celia. She wondered if the blind woman had created her own world now that she didn’t have to see the reality of the one that surrounded her.

Without any regard for shame or privacy, Annie blurted out, “Sarah has been in asylums ever since her husband decided she was better out of the way, and Myrtle here was committed by her son, who owed her money. Apparently locking her away was much simpler than paying back the debt, eh, Myrl?” Annie chuckled as if this were humorous, and Myrtle nodded, smiling. Celia could find nothing to laugh about at all, and was indeed, horrified. She looked again to Sarah, and bit her lip to keep back a spontaneous sob that threatened. Husband shut her away? Was this then her future? Because she had blindly trusted a lover that needed her out of the way, too?

Then Annie gestured to the third woman, who was sitting near Myrtle and Sarah, but not quite with them. It was as if the few inches that she had put between her knees and theirs declared her wholly separate. “This fairy queen here is Caroline. But I call her Queen Caro.”
Caroline nodded regally in their direction, an expression that was somehow dreamy yet imperious was fastened to her features.

“How do you do?” Caroline asked, nodding slightly at them again, her eyes shifting over for just the smallest of moments before settling back into seeing things that weren’t there, or were, or had been at one time.
Caroline was tall, or would be when she stood. She had long brown hair the color of cherry wood that hung in lazy curls down her back and shoulders. Her eyes were overly large and eerily green, like a mixed potion in a fairytale. Her skin was fresh cream and her lips were pink and slightly parted. She was lovely, but child-like, more so than Celia even. Celia had features most often seen on porcelain dolls, though her skin was a bit darker. But Caroline was something else entirely, a beautiful goddess of a woman with the mind of a child. Though there was nothing about her to cause such a reaction, Celia decided she was a little afraid of Caroline.

Annie watched Celia’s reaction, and chatted on with her Queen.
“How do you do, your highness?”
“Well enough, I suppose, though the kitchen seems to have run out of cherry tarts,” Caroline narrowed her eyes and twisted her lip petulantly.
“Oh no!” Annie tutted, “A great shame! But I must take leave of you now, Queen Caro.”
Caroline nodded in their direction and Celia watched as Annie performed a curtsey before looking at her sharply, indicating she was expected to do the same.
Bewildered, Celia executed a passable curtsey and was pulled away roughly by Annie.
“Poor thing. Kicked in the head by a horse when she was a child. Though, I suppose there are worse things to be deluded about than believing yourself royalty.” She paused a moment and then looked at Celia.
“Don’t approach her alone, mind you. She might look sweet and child-like, but she’s a holy terror when she’s wound. Madder than a bag of ferrets, that one.” She arched her brows meaningfully and whispered, “Violent”.

Celia shivered.
Excerpted from Forget Me Not Blue by Alexandria Nolan, all rights reserved.

Order your copy here: Forget Me Not Blue