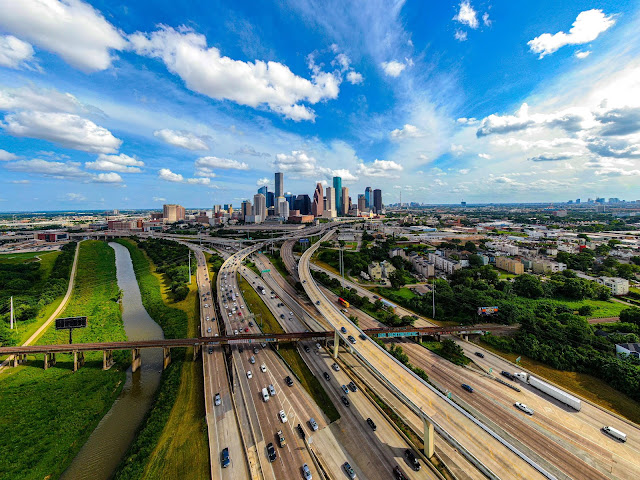 My partner and I recently visited Houston for the first time since we left over two years ago.

When we left I was five months pregnant, and we were riding in our car packed to the gills with a dog, two cats, and a bunch of clothes, ceramic vases, crystal from our wedding and anything else we didn’t trust the movers with. As we drove away, the outside temperature grew colder and colder the further north we drove, until we were frozen solid upon arrival in Calgary. Frozen, but excited for new experiences and a new country and a new addition to our family on the way.

When we left Houston, we were tired of it. Too hot, too humid. Too many cars and too many cowboy hats and we were simply sick of it. So it was funny on this visit back, to realize just how much we had missed it.

Familiar graffiti greeted us in our rental car as we headed into downtown from the airport. A stop at “our” grocery store and then how could we pass up a margarita or two at our favorite Mexican restaurant? We’d been gone for two years, so of course there were changes aplenty. A coffee shop we used to frequent had been completely renovated, a few antique stores closed down. That favorite Mexican restaurant had moved to another street a few blocks away, its former location razed to make way for high rise apartments. (A fact that had initially terrified us, when pulling up, mouths watering for salsa to find our restaurant vanished. A quick Google search put us in the right place, but for a few panicked seconds, we were in anguish.)

Houston was mostly the same, but it was changed, too, as we had expected. Two years can do a lot in a big city.  But more than anything, it was we, of course, who were most different. When we’d left the city, we were two, and on this visit, we were three. Our son loved the grass filled parks and the sunshine days. It was a relief to get him ready for the day and not have
to add two coats, gloves, a scarf and boots for a walk outside. He sat on the lawn and ran his hand over the grass for minutes on end, in awe of simply being outside. Our old favorite places weren’t exactly as we remembered them, but they were familiar enough that we felt welcomed. And though we know summer is a very different beast in Houston, we had forgotten how pleasant it was to be in a city that isn’t snowy and frigid the majority of the year.

Old friends called and invited us to dinner, some of whom had children of their own since we had left. And so even though they were our same friends, they were different too. We’d sort of “changed together”, though we had been a country apart.

We visited the museum and were reminded how fabulous the visiting exhibits and permanent collection is. There were so many more parks than we remembered, so many more restaurants that we hadn’t tried.

We had left Houston two years ago hopeful of new experiences in Canada, not realizing there were so many opportunities in Houston that we had yet to explore. Perhaps it is as they say, that distance makes the heart grow fonder, or maybe, it’s possible that being buried under an avalanche for two years in Canada might have something to do with our changed hearts.

Either way, our visit ended in an offer on a house, and a plan to move back, as soon as possible.