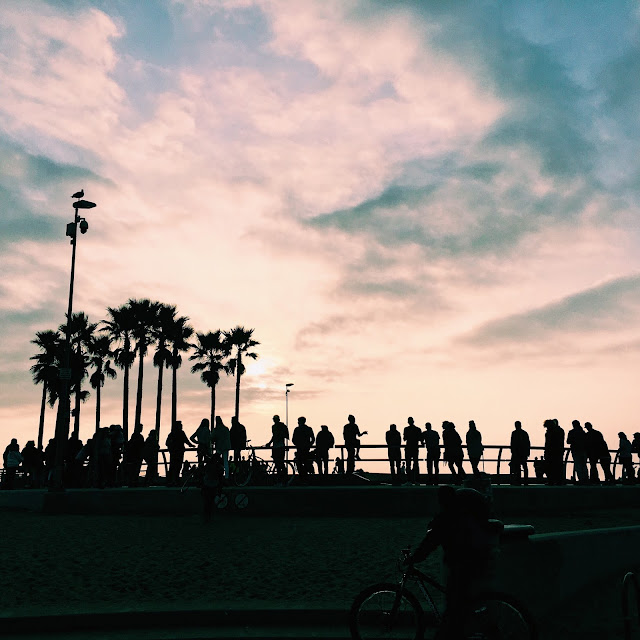 I’ve been to California a few times. San Francisco, Napa, lots of wine country gallivanting and bay area exploring. But Los Angeles was new, and to be honest, a little daunting.

We’ve all seen the pictures of celebrities around L.A., and red carpet appearances, the images of Hollywood, Beverly Hills, Rodeo Drive. Los Angeles is enormous, and seemingly full of gorgeous, glamorous people. More than Paris, more than Milan, more than anywhere I’d been, it was a very intimidating trip for me. I didn’t have any idea what to wear in the winter in Los Angeles, I had no clue just how immense the city was, and even before I exited the plane I felt a bit…overwhelmed.

I thought I knew palm trees.

I now live in Texas, where there is a whole mess of them, and I’ve spent time in Mexico, Central America, the rainforest…but there is something special about the palms in Los Angeles. They are inordinately tall, and they gather together in almost architectural clusters. On the drive from LAX to Hollywood, the palm trees were the first thing to pull me in.

The second was dinner that night. The entire trip to Los Angeles was one amazing meal after the other. The freshest sushi, the most wonderful middle eastern food, the healthiest kale-kombucha-acai whatever bowls. The turmeric lattes and the cold brew coffee, the cocktails and wine selections and the atmosphere of the bubbling joy-filled eateries. Everything was delicious, without exception. Which, was something I hadn’t been expecting. I had thought to find glamour, to find glitz and inflated prices. I thought to find model-thin ladies and actor-attractive men with impressively tailored suits, but I hadn’t thought to find the bounty of absolutely divine edibles.

And after that, I cared little about the celebrity look-alikes or the poshness of Los Angeles, and instead was just excited to taste the next delicious thing. A friend  of Terrence's lives out in Santa Monica, and he invited us to visit the beach side of L.A., and we quickly went. The vibe was immediately different— slower, more chilled out, and calmer. Santa Monica itself reminded me a little of Michigan beach towns, but the atmosphere on the actual beach in Venice and Santa Monica was a world away. The elderly and the eccentric “skate-dancing”, the rolling sound of skateboards and people randomly napping, fully-clothed in the sand, a bottle of pop clutched to their chest like a treasure.

The sunset comes early in California, and watching the bright orange of it sinking into the waves from a rooftop bar was one of the most arresting sights of my life. The waves purring quietly into shore, the light fading, and the sounds of  California nightlife growing ever louder. As soon as the sun disappeared into the darkness of the water, it was time for more food.

Two cocktails, a glass of champagne and twenty or so pieces of the most incredible sushi I’ve ever had in my life later, we’re packed into a dark uber, heading back to Hollywood. It’s amazing to me how varied the different parts of the city are. The cliff top architecture and pink smog air of the Getty Museum, the warehouse pop-up shops and food trucks of DTLA. The pomp and old movie glam of Hollywood and Beverly Hills and the beachside charm of Santa Monica and Venice. All united by of life-altering foodstuffs and those lovely California palms.
Labels: california LA food LA travel LA winter Los Angeles food Los Angeles vacation los angeles winter