Scattered the Night, the New Novel 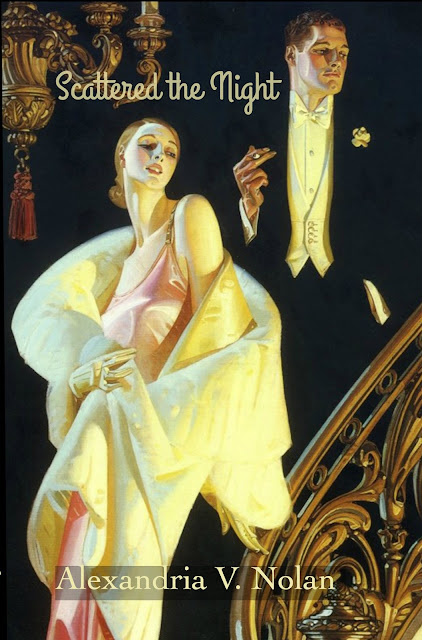 The new book drops in just a few days (Insert nervous squeal here) and I'm really excited about it. Not because I'm a big deal author, or I think I'm going to make buckets of cash, but because I think honestly, that the work is good.

And not just because my mother says so, (though she does have fabulous taste) but because the writing is solid and the stories within the novel are...well, really quite good. (For lack of a more substantial word.)
Here's the description:

Darkness falls at the Rosing residence. A grand estate outside of the city known for mysterious festivities and its rumoured secret society.

The Tale-Teller's Guild. A soirée for writers. A gathering that everyone whispers about, but many doubt is real. A salon where writers come together to drink fine forbidden vintages and share short stories.

A romance novelist, an adventurer, a scandal, a cad, and a war hero. Two aged literary legends-- and Vida.

The stories aren't what she would expect. The tales they tell don't match the words they usually publish. The tales seem to spring unbidden, revealing the secrets of each novelist, essayist or poet.

That is the purpose of the Tale-Teller's Guild, after all. To remember. To reveal. To tell the stories locked within.

And even Vida has secrets.

The Pre-Order for Kindle is LIVE now, and the Paperback and Kindle both drop on April 7th. For your reading enjoyment, I've included an excerpt from the book, below:

"The room was all gilt and brass and dark wood, with heavy velvet draperies in crimson and leather books with embossed gold titles that were beautiful but impersonal. The room itself was lovely, but it seemed more like the set of a play than a home. Too cosy, too perfect. Vida didn’t much want cake, nerves were twisting in her stomach like two cobras wrestling, but she’d stood up with the others to fetch a plate of it anyhow. She ended up at the sideboard, holding out a plate with one hand and fluffing her waves with the other. She felt an arm brush against hers and she turned to meet those muted green eyes once again.
There was something very intimate in the way he looked at her, and she thought to be flattered, but wasn’t. She usually shied away from such forward male attention, but there was something in Austin’s face that captured her, as though the face existed in her memory and she needed more time to place him. He was familiar to her, though not from pictures she’d seen in the papers or the gossip rags. It was something else. Attraction, definitely, but something more. Something like recognition, but of what, she still couldn’t place. She felt strongly that they’d been in mid-conversation at some point in their lives, and now they’d been placed back together to continue the discussion, and she was at a loss for what the topic had been."

Excerpted from Scattered the Night, by Alexandria V. Nolan, all rights reserved